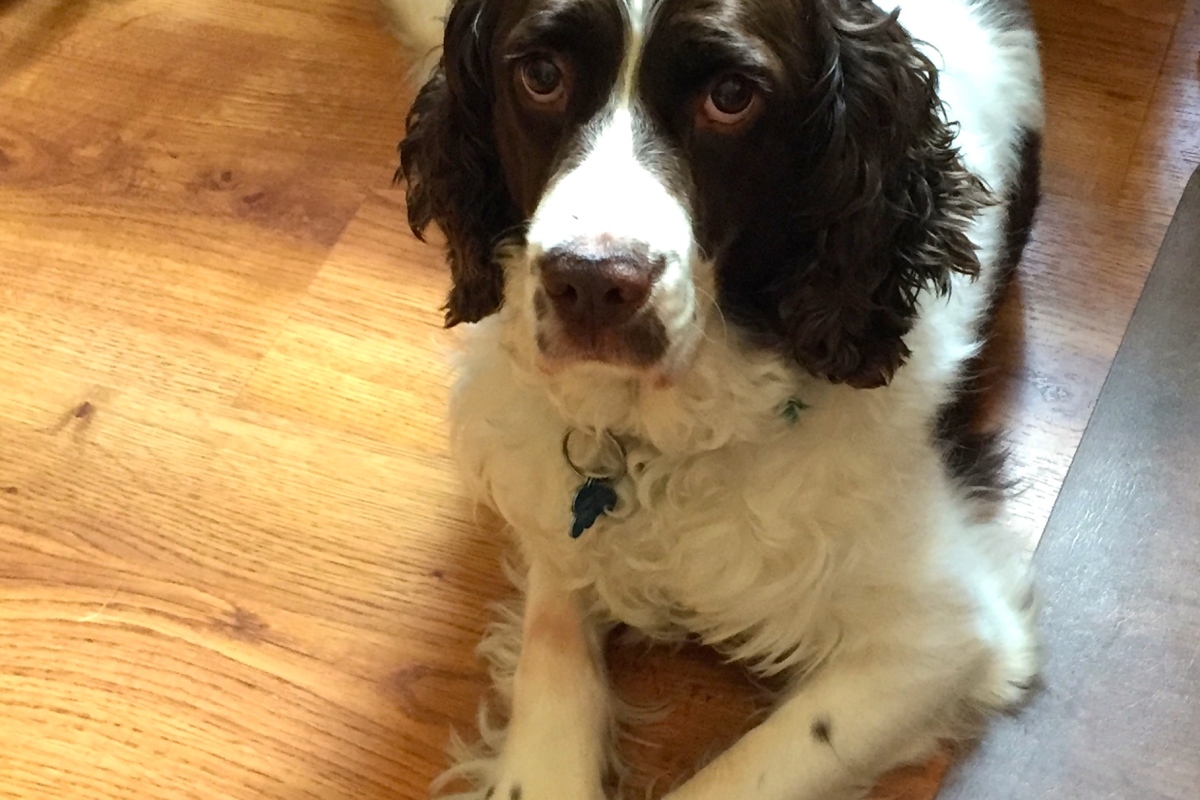 Generally speaking, the pet-ownership world is reputed to be divided into people that prefer cats, and those that like dogs. I fall into the latter category. I make no judgment of folks that enjoy birds, fish, rodents, horses, amphibians, snakes, reptiles, insects . . . or dinosaurs.

Thus far, three Springer Spaniels have graced our household. It was a breed we came to like, on account of their affection and loyalty, if not towering intellect. All were rescue dogs: Jeeves and Gus were males, while Abby (pictured above) is female. Our present canine, whom we often call “Abby the Wonder Dog,” might have had the hardest start in life of the trio.

After having to put Gus down at far too early an age, we were uncertain whether some time should pass before we looked for his replacement. It was a sentiment that didn’t last for long. Finding Abby required an extensive Internet search: for a while the only Springers available were geriatrics, or were animals that had suffered an injury. At last we found Abby in a small shelter in Michigan’s Upper Peninsula. There was no way to know whether the seven-hour drive (one way) would result in our having a new pet – or not. After a short visit we decided to take Abby home with us, picking ticks off her coat all the way.

The personal histories of rescue animals are often sketchy. The shelter staff said Abby had been owned by an couple that planned to train her as a hunting dog. It didn’t work out, so off to the shelter Abby went. Living with her has given us an insight into why she wouldn’t have made it as a hunter: Abby runs and hides whenever there’s a loud noise, whether thunder, fireworks or when the family rabbit “thumps” an alarm. Gunshots would have sent her into a tizzy.

In the over three years that Abby has been among us, I’ve come to believe that dogs’ personalities reflect their genders, as it is said of human beings. Sure, Jeeves and Gus were individuals, but Abby differs from both of them. She expresses herself via an amazing range of vocalizations. It isn’t unusual for Abby to sit in a central place in the family room, “lecturing” any people present on who knows what subject. She often has something to say upon waking in the morning, too. Maybe we call her “Wonder Dog” because we are uncertain what she’ll say next?

Sure, Abby’s frequent habit of expressing herself audibly can get on our nerves. Getting her to, well, shut up can be a real trial. That being said, the photo of her is indicative of Abby’s generally sweet disposition. I think we will keep her; God knows she intends to keep us!

As I begin this post, it is important in these turbulent times for readers to understand that I am not using it to make a political statement. Got it? Okay.

The United States has been at war for fifteen years in Afghanistan and Iraq; only the Vietnam War, twenty years in duration, lasted longer. For reasons I cannot explain, when the U.S. casualty count reached the 2,000 mark in October 2005 I decided to put a sign on the front yard to tally the growing number of brave American servicewomen and servicemen whose lives were lost in Afghanistan and Iraq.

I believed my small sign was innocuous enough not to attract negative attention. However, not long after it was installed something happened that showed it not to be the case. One morning the sign was gone. Not knocked down by someone that misunderstood its purpose, just taken by person or persons unknown. This got my dander up, as the sign said nothing about the responsibility for, nor the conduct of, the two conflicts in which we were involved.

I wasn’t about to take the matter lying down. I hurriedly constructed a placard for the yard stating why I’d made the sign, explaining that, if it wasn’t returned, I would just put another one in its place. I am thankful that, a couple days later, the original sign was thrown onto the front porch.

People pass by the sign every day. Most don’t seem to notice it, although once I saw an older gentleman stop before it, come to attention and snap off a military salute. That incident crystallizes my rationale for putting up the sign in the first place: showing respect for the fallen.

The fine Canadian rocker Bruce Cockburn (CO-burn) penned a song that touches on this topic. In 2009 Bruce visited his older brother in Afghanistan, where he was doing a hitch as a surgeon with the Canadian Forces. Bruce, having witnessed the solemn ceremony wherein the dead are transported to the cargo aircraft that will repatriate them, composed “Each One Lost.” I commend the tune to you. (It is a cut on the 2011 album “Small Source of Comfort.”) The refrain will suffice to bring this post to a close:

is everyone’s loss you see

each one lost is a vital part of you and me.”