Humans needn’t worry about “The Invasion of the Body Snatchers.” No, the threat we face is far more insidious than merely having our loved ones replaced by emotionless imposters.

In recent decades the growth of the internet, and internet-connected devices and related services have washed over society with the unbridled force of a tsunami. First it was personal computers; then smartphones and wrist devices; next, email and Wi-Fi; Facebook, Twitter, Tik Tok, Instagram, and their ilk; and on to the proliferation of shopping apps. Finally there is the Internet of Things, the network of physical objects that are embedded with sensors, software, and other technologies for the purpose of connecting to, and exchanging data about us with other devices and systems over the ‘Net.

“What’s not to like?” you may ask. “Isn’t life more convenient for us? Aren’t we more connected, more efficient, and better informed?” I’m not here to argue against all these assertions, let alone to pretend that I do not utilize some of this tech-bait. But I want to deliver a cautionary tale about Surveillance Capitalism.

Harvard Professor Shoshana Zuboff came up with the concept. Her detailed definition of the term merits a careful reading: 1. A new economic order that claims human experience as free raw material for hidden commercial practices of extraction, prediction, and sales; 2. a parasitic economic logic in which the production of goods and services is subordinated to a new global architecture of behavioral modification; 3. a rogue mutation of capitalism marked by concentrations of wealth, knowledge, and power unprecedented in human history; 4. the foundational framework of a surveillance economy; 5. as a significant threat to human nature in the twenty-first century as industrial capitalism was to the natural world in the nineteenth and twentieth; 6. the origin of a new instrumentarian power that asserts dominance over society and presents startling challenges to market democracy; 7. a movement that aims to impose a new collective order based on total certainty; 8. and, an expropriation of critical human rights that is best understood as a coup from above: an overthrow of the people’s sovereignty.

Invented and perfected by Google, surveillance capitalism unilaterally claims human behavior as a source of freely tendered raw material that is translated into a behavioral surplus fabricated into prediction products that anticipate what you will do now, soon, and later. The acquisition of our voices, personalities, and emotions enable surveillance capitalists to nudge, coax, tune, and herd human behavior toward outcomes from which they will profit. These vast domains of new knowledge are accumulated from us, without our permission, but their use is not intended to be for us.

It is impossible to boil down Professor Zuboff’s 525-page work into a handful of bullet points, so I urge you to obtain it from the library or a bricks-and-mortar bookstore. What I will do in closing is to give an example from my own life of surveillance capitalism’s impact.

Many friends know that I am a fan of the University of Michigan and Pittsburgh Steelers football teams, something I’ve alluded to on Facebook a number of times over the years. Despite this I was startled one day to find in my feed a link to a vendor, offering this T-shirt for sale. 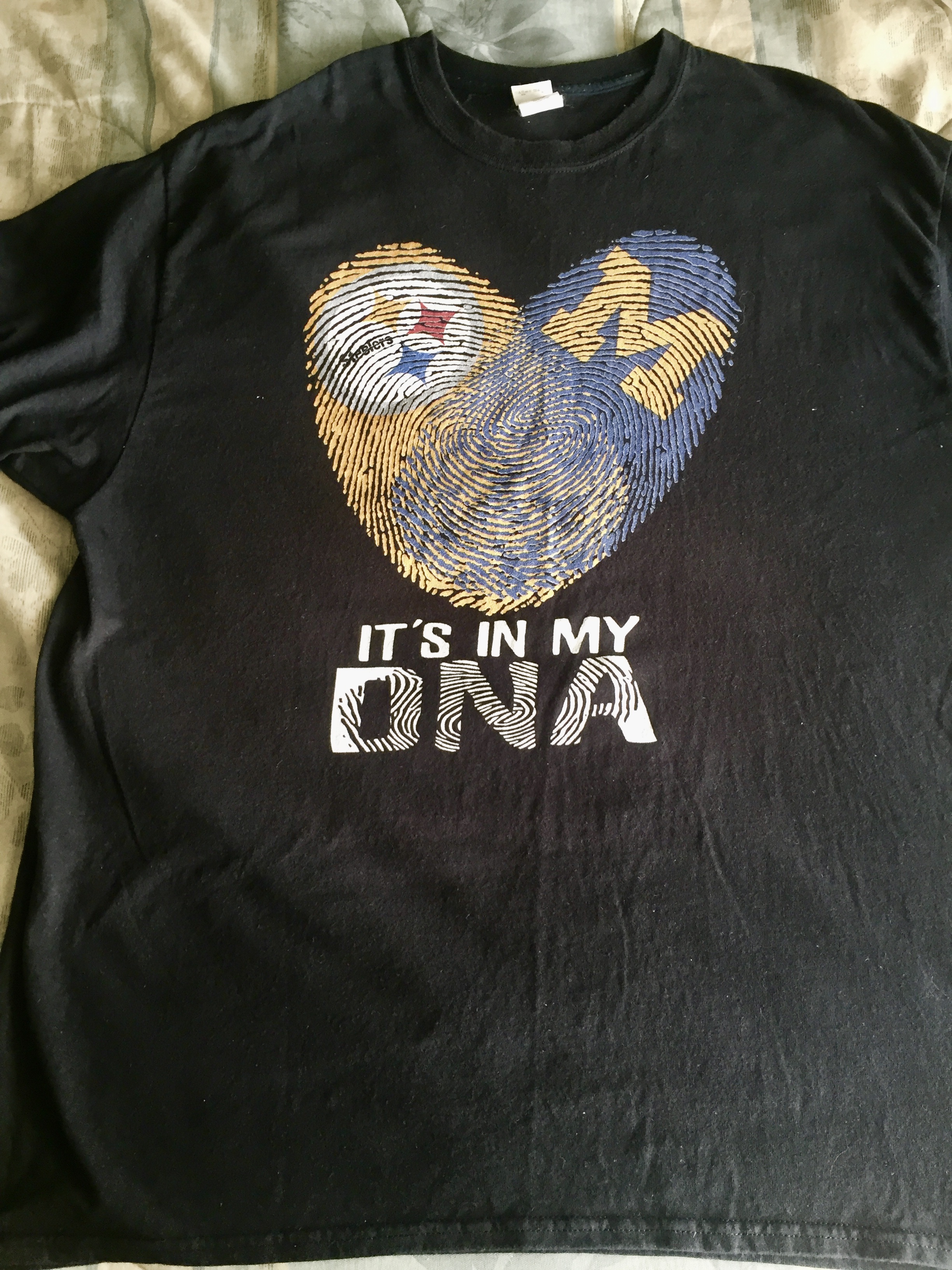 The item’s design cleverly combines the logoi of the two teams I follow. I admit that I liked the shirt so much that I bought it without hesitation!

The ad for the T-shirt popped up in my Facebook feed without my having searched for something like it online, or even having inquired on FB whether anything like it existed. The only conclusion I’ve been able to draw is that the “scraping” of my personal data enabled an algorithm to put me in touch with a source for a product, unbeknownst to me.

2 thoughts on “Alexa, Facebook, Google, iPhone, Nest, etc. are not your friends!”