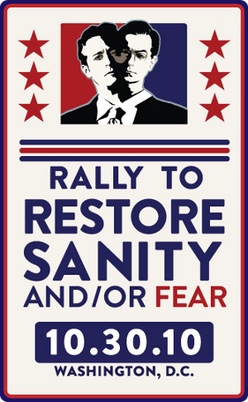 Ten years ago today I was among an estimated 215,000 people that congregated on the National Mall, in Washington, D.C. This post will explain the occasion for my being there, giving my impressions of what happened that day, and what the event came to mean to me.

On August 28, 2010, the Fox News Channel’s Glenn Beck held an event called “The Restoring Honor” rally to “restore honor in America” and to raise funds for the non-profit Special Operations Warrior FoundationThe event was held at the Lincoln Memorial, the same location, and on the 47th anniversary of, the 1963 March on Washington and Martin Luther King Jr.’s historic “I Have a Dream” speech. That rally coincided with the “Reclaim the Dream” commemorative march planned by Al Sharpton and Martin Luther King III further down on the National Mall and adjacent to the Tidal Basin, at the future site of the Martin Luther King Jr. Memorial.

Along with Beck, the speakers included former Republican vice presidential nominee Sarah Palin and activist Alveda King, a niece of Martin Luther King Jr. Beck urged Americans of all religions to turn to their faith in God, “turning our face back to the values and principles that made us great.” His and Palin’s speeches praised George Washington, Abraham Lincoln, and Martin Luther King Jr., as well as American war veterans. Americans were called to unite despite political or religious disagreements. Some 240 clergy from different ethnic groups and faith traditions joined the event’s speakers on stage before its closing statements.

On September 16, Jon Stewart, host of the satirical news program The Daily Show, announced that he was organizing a “Rally to Restore Sanity,” with a mock motto, “Take it down a notch for America.” Soon afterward Stephen Colbert, in-character as a conservative political pundit on The Colbert Report, announced a competing, “March to Keep Fear Alive,” rally. When Colbert told Stewart that he lacked a permit to organize his march on the Mall, Stewart proposed merging their events into a “Rally to Restore Sanity and/or Fear.”

At first it appeared that the rallies was only a joke. But the day after they were announced, 69,000 people pledged on Facebook to attend. Plans were made to hold sister events in other major cities, including Seattle, Chicago, Austin, and Los Angeles. On September 29 President Obama cited Stewart’s event as representing people that were concerned with more than just the political beliefs of others.

(Prior to the announcement of the joint rally, supporters of the “March to Keep Fear Alive” began a drive to raise money for educational charities. In the first 24 hours, over $100,000 was raised; by the day of the event over $500,000 had been contributed. For his part, John Stewart promoted the Trust for the National Mall. As of October 31 over $188,000 had been donated to the Trust.)

As the number of participants swelled, the Stewart-Colbert event was relocated from the grounds of the Washington Monument to the east end of the Mall, facing the Capitol. Sheryl Crow, Don Novello (a.k.a Father Guido Sarducci), Yusuf Islam (formerly Cat Stevens), Ozzie Osbourne, and The O’Jays were among the featured guests. The rally was broadcast live on Comedy Central and C-SPAN. The Comedy Central broadcast reportedly drew 2,000,000 viewers, with an additional 250,000 live video streams on the Internet.

Satirical comedy was the day’s common denominator, with Colbert asserting that his fear was superior to Stewart’s reasonableness. Colbert emerged from a “fear bunker,” costumed as Evel Knievel. He challenged Stewart’s position point by point, usually claiming victory. At one point Yusuf Islam sang his classic “Peace Train,” only to be mock-interrupted by Ozzie Osbourne’s “Crazy Train.” Then Stewart and Colbert compromised, singing “Love Train” with the O’Jays.

In the event’s finale, a giant papier-mâché puppet of Colbert, dubbed “Fearzilla” was brought on stage. Peter Pan—played by John Oliver—then appeared to lead the audience in a chant that caused Colbert and his puppet to melt into the stage, thereby handing final victory to Stewart.

Stewart closed the event with an explanation of his intentions for it. He said, “This was not a rally to ridicule people of faith, or people of activism, or look down our noses at the heartland, or passionate argument, or to suggest that times are not difficult and that we have nothing to fear. They are, and we do. But we live now in hard times, not end times.”

Like many people, I thought the “Rally to Restore Sanity” was a joke at first. Then, as word of its becoming a reality spread on social media, I registered to attend. I was fortunate that one of my daughters lived on Capitol Hill, a short walk to the National Mall, and so didn’t fall prey to the difficulty in finding lodgings encountered by so many people.

It was a lovely fall Friday, with a chill that dissipated before the event got underway. Even though I arrived well before then, due to the size of the crowd I ended up standing far from the stage. There was a long wait for the rally to start but people were friendly and interested in finding out where those around them hailed from, and why they had come to D.C. As always seems to happen when I’m among a large number of folks far from home, I encountered a fair number in Washington that were from my town! When things started most of us had to rely on viewing via gigantic video screens that dotted the Mall, trying to make out over an inadequate sound system what was being said or sung.

Over all I’d say that the crowd was pretty peaceful. The only disturbance I witnessed was when a couple dozen chanting people surrounded a Fox News transmission truck, rocking it back and forth on its tires. Thankfully cooler heads prevailed, and the untoward activity stopped before the vehicle was tipped over.

What did the event mean?

I believe its impossible to gauge the impact of any mass participation event on individual participants’ lives, let alone on the nation as a whole. (It astonishes me to realize how the Rally to Restore Sanity and/or Fear took place sixteen years before the political and social upheaval that has resulted from the 2016 Presidential election.) What I can say is I felt tremendous solidarity with the Americans in whose midst I spent a few hours a decade ago. Recalling the experience has helped carry me through what has taken place in my country in the years since I stood on the National Mall.

And maybe that is enough.